To what you may ask? I think the list can be endless. In my case it is definitely resistance to change.

It is inevitable and part of our lives, but in my case, I really struggle to deal with it in a transformative way. On a day-to-day basis all appears to be going swimmingly, but if I scratch the surface just a little the problem is laid bare. Let me give a recent example, during January I took part in Natasha of The Loving Chef’s Veganuary cooking classes. The benefits of celery juice as a cleanser was discussed and Natasha (and one of the other participants) explained how they start their day with a glass of celery juice to detox the liver. Celery has never been one of my favourite vegetables, but I thought I’ll give it a try. To make it slightly easier for myself I followed a smoothie recipe which contains celery, cucumber, spinach, lime juice and a little bit of ginger to which I add just a little bit of soya milk. Magic! I loved it and followed this for at least 10 days.

Instead of starting my day with this, I chose to end my day with it. Celery is a natural diuretic and drinking it at night meant that I had to go to the loo a couple of times during the night. The benefits out weighed these minor hassles, because I quickly felt better, I could feel my stomach was flatter and I felt much lighter (I don’t have access to a bathroom scales at the moment so I am not sure if I lost any weight, but it certainly felt as if I did). As I said this continued beautifully for at least 10 days and then the resistance to change gene kicked in again to jeopardise all the good work! Oh, I forgot to mention that the aim is to drink the celery juice for 30 days……..

Suddenly the thought of my green, celery infused, smoothie held no attraction. Instead I craved for a slice of toast with avocado, homemade carrot cake and a glass of wine, still not bad you may say, but going against the flow of my intentions to detox in a very gentle way. 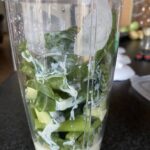 Green smoothie in the making 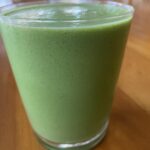 So what now…… I don’t really have the answer (yet) and welcome any suggestions. What I did do though, simply because I know myself well enough to not force the issue as it will make it much worse, I allowed the urge for whole wheat seeded toast with avo and homemade carrot cake to be satisfied and will return to the celery smoothie again when I feel ready to do so.

This may seem like a ‘non-issue’ issue to many of you, but it is an example of a repetitive tendency which can be quite destructive in many ways as I know it is holding me back on many levels. I am sure I am not alone in this and if this resonates with you, what are your coping strategies? I would love to learn from you now that it has come under my radar with great awareness.

I shall continue to try and explore ways to manage this resistance in a more positive and transformative way….. watch this space. I welcome any suggestions!